OLMITO — The ministry of Jesus Christ did not stand still. He set out on foot with his disciples to seek those who were looking for him.

“The Church can’t sit in its own place and wait for people to come,” the bishop said.

Father Joel Flores of San Pedro Catholic Church in Olmito is carrying that spirit of active ministry to his parish on the Military Highway west of Brownsville.

In the case of San Pedro, that means setting up a Capilla Móvil. The mobile ministry travels monthly to four large colonias north of San Pedro, heading from the Military Highway toward Olmito. Father Flores conducts Mass and religious services on the Capilla Móvil, a refurbished trailer that the pastor and a parishioner welded back to life.

“It was literally a rust bucket,” Father Flores said.

It is now a vehicle for Christ in taking his word to colonias in the San Pedro Parish. The Capilla Móvil was blessed by Bishop Flores on Feb. 15 at one of those colonias. He spoke of the need for an active and mobile ministry.

“I tell priests constantly, ‘We need to celebrate Mass where the village is,’” Bishop Flores said at the blessing. “Where the village is, there you will find Christ.” The Bishop celebrated the first Mass with the Capilla Móvil after giving his homily. Father Flores set the groundwork in motion months before by conducting services in empty lots – and once in a garage – in the colonias on the northern edges of the San Pedro Parish. The Capilla will give him better reach into the cluster of neighborhoods.

“I see it as going where the people are,” Father Flores said. “It makes them feel as if you’re bringing the reality of God to them.”

He plans to conduct four Mass services a month out in the field, rotating among the four colonias. Father Flores celebrated an Ash Wednesday service in late February with the Capilla Móvil. The mobile ministry is something of a throwback to eras gone by when priests rode on horseback to far flung areas to conduct religious services at ranchos and other rural outposts.

The idea of the Capilla Móvil was inspired, in part, by a Rio Grande Valley photo from 1916 depicting a country chapel. When Father Flores saw it, it made him think of the efforts made in those times to get the word of God out to rural areas, and what could be done today to replicate that kind of ministry.

“If it worked in the past, no reason it won’t work again,” he said, recalling his thoughts of getting the Capilla Móvil started. “‘Let’s give this a shot.’”

Bishop Flores spoke at the Feb. 15 blessing of following the example of Jesus in taking the word of the Lord to communities and places where people live. If the people can’t get to the altar because it’s difficult to get there, the bishop said, then it needs to be taken to where they are. Father Flores said such difficulties are a present day reality for many colonia residents who are immigrants and come from countries where walking to church is commonly done.

“They come from places where communities were built around the church, so it was readily accessible,” he said. “We know here in Texas people drive to church and the distance is often too great to walk to celebrate Mass.”

The colonias are responding well to the Capilla Móvil. Father Flores said communities are excited when the Capilla comes to their colonia. They believe it sets a good example for youth in seeing religious services celebrated in their neighborhoods. He also believes it brings an added sense of safety and stability in communities where many immigrants live.

It also speaks to having a compassion and empathy for fellow followers of Christ in the celebration of their faith.

“The Lord says to us, can you be concerned about others that they have this bread that comes down from heaven?” Bishop Flores asked at the blessing. “And if you can, will you invite them to know the feeding of the Lord?”

The Capilla Móvil is active in those efforts, bringing the word of the Lord and the Eucharist to rural areas and expanding the reach of the San Pedro Parish. 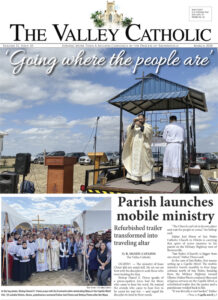